The nucleocapsid consists of 3 types of proteins1:

Genera in this family include:

Vesicular somatisis virus (VSV) has been well studied.  Most of what we know about the replication of Rhabdoviruses we know from VSV.

The G protein spikes on the surface of VSV attaches to the host cell11.  VSV has a broad tissue tropism and is able to infect most or possibly all human cell types12.  VSV is also able to infect other mammals and insects***.  A specific receptor that interacts with the G protein of VSV has not been identified.

The G protein causes the viral envelope to fuse with the vesicle membrane13.  The G protein undergoes a conformational change cause by the more acidic pH in the vesicle13.  This conformational change exposes a hydrophobic domain of the G-protein which inserts into the vesicle membrane and allows for membrane fusion13.  Membrane fusion causes VSV released into the cytoplasm11.  The (-) ssRNA genome remains associated with the nucleocapsid proteins to protect it from degradation in the cytoplasm1.

Transcription of VSV occurs in the cytoplasm1..  The nucleoproteins are responsible for transcription.  The L protein is an RNA-dependent-RNA-Polymerase (RdRp) that transcribes mRNA from the (-) ssRNA genome1.  The L protein is also thought to be responsible for adding a 5’ cap to the mRNA1.  A poly-U sequence in the genome encodes for the poly-A tail1.

Genes located closer to the 3’ end of the genome are expressed more and are the proteins required in the greatest abundance1.  Once the viral nucleocapsid proteins produce mature mRNAs, they can be translated using the host cell machinary.

Replication of the genome occurs once there are enough nucleocapsid proteins have been produced to protect the newly synthesized genome from degradation in the cytoplasm.  The L protein synthesizes a (+) ssRNA anti-genome from which many copies of the (-) ssRNA genome are produced.  The P protein has been shown to be essential for DNA replication13.  The P protein may serve to bind and displace the N protein from the viral RNA so that it can be replicated13.  The N protein is important for genome replication because it helps the L protein to copy the entire (-) RNA strand to produce the (+) anti-genome template 13.  The N protein is thought to bind to the leader sequence at the 3’ end of the genome and allow the L protein to ignore the transcription stop sequences in the genome13.

The matrix protein (M) associates with the plasma membrane2.  The N protein promotes the encapsidation of the genome13.   Then the nucleocapsid containing  the (-) ssRNA genome interacts with M at the plama membrane2.

VSV particles (purple) can be seen budding from the host cell. Image from: http://www.sciencephoto.com/images/download_lo_res.html?id=770500995

Rhabdoviruses of Plants and Animals

Rhabdoviruses are widespread in the environment. Different genera of rhabdoviruses have the ability to infect plants or animals. Diseases caused by these viral infections result in both devastating medical conditions in humans and huge financial losses in agricultural crops. Only a few genera will be discussed here. While any given genera may have multiple species and diseases associated with it, only one disease will be described for the genera mentioned below. 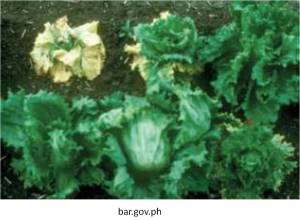 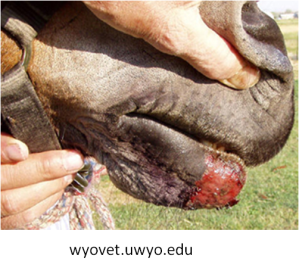 Availability of Antivirals or Vaccines

Viruses within the family Rhabdoviridae induce diseases in humans, fish, animals, and plants. Outbreaks of these diseases are detrimental to the food supplies and health of individuals within communities. The financial burden of lost crops and livestock to certain species of rhabdovirus is significant. Therefore, many efforts have been focused on developing vaccines to ward off these diseases. Many crops are destroyed by several species of Rhabdoviridae; however, insecticides are used to treat these outbreaks more frequently than vaccines. This is because plants are quite difficult to vaccinate. Most vaccines are administered to humans, their livestock, and their pets. 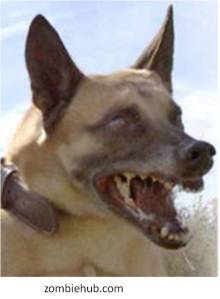 This paper describes a new species of Rhabdovirus discovered in the African rainforests. The discovery of the virus was prompted by a surveillance program of viruses in mosquitoes in West Africa. RNA isolated from the virus was subjected to high-throughput pyrosequencing and blasted against other members of Rhabdoviridae. This new species, called Moussa Virus (MOUV), has sequence homology to other Rhabdoviruses between the genes encoding the Large protein (L), Glycoprotein (G), and Nucleocapsid protein (N). The ORFs of the Matrix protein (M) and Phoshoprotein (P) genes did not show sequence or amino acid homology to other rhabdoviruses. However, the tertiary structure of the proteins including phosphorylation and glyosylation sites appear to be similar.

The rhabdovirus with the M protein most similar to MOUV is the Wongable virus (WONV), which has 20.7% homologous identity to the new viral M protein. The rhabdovirus with the most similar G protein to MOUV is the infectious hematopoietic necrosis virus (IHNV), which has 23.2% homologous identity to the MOUV glycoprotein. In addition to the 5 typical proteins observed in Rhabdoviridae, MOUV contains additional genes, including one denoted as the “C-protein”. This new virus also has the common 3’ leader sequence which is conserved in Rhabdoviruses that infect mammals . There were also different strains of this virus identified which can be subdivided into forest strains and plantation strains by ANOVA. This new viral classification could have implications on epidemiology and is now incorporated into the disease monitoring program in West Africa.

This paper evaluated the genetic sequence and amino acid sequence of the Rhabdovirus Matrix protein to determine pathways by which this virus causes apoptosis in host cells. This research is important in understanding the virulence of different species of Rhabdoviridae because apoptosis is inversely correlated to pathogenicity in lyssaviruses. Different lyssavirus proteins have been implicated in inducing cell death. While glycoprotein, phosphoprotein, and matrix protein have all be shown to cause cell death, the matrix protein was evaluated closely in this study because this is the protein used by other families in Rhabdoviridae to cause apoptosis.

Matrix protein was obtained from two viruses: Mokola virus (MOK) and rabies from a dog in Thailand (THA). The M proteins were truncated into mutants spanning various regions of the amino acid chain. A span of 20 amino acids between residues 67 and 86 was identified to induce apoptosis through two different pathways. One pathway utilizes the tumor necrosis factor (TNF)-related apoptosis-inducing ligand (TRAIL). This occurs when the M-protein activates capsase 8. The other pathway interferes with the respiratory chain when the matrix protein inhibits cytochrome c (cyt-c) oxidase (CcO).

The mutation analysis revealed that the K amino acid at position 77 is required for M-MOK to inhibit CcO. For CcO to be inhibited by M-THA, position 77 needs to be a K or a R residue. While M-MOK induces apoptosis via the TRAIL pathway when position 81 is N, M-THA is a bit more complicated. Some THA-infected cells have a low sensitivity to the influence of TRAIL due to the expression of the p53 tumor suppressor protein. Understanding how different species and strains of Rhabdoviruses induce apoptosis will allow researchers to produce more effective vaccines or treatments for diseases caused by such viruses.

Brain cancer currently has no effective treatments.  There are several characteristics of brain cancer that makes it an especially difficult cancer to treat.  Brain tumors are difficult to remove surgically as they are commonly multifocal.  Tumor causing cells can also easily be left behind after surgery.  Additionally, the brain is impenetrable to many therapeutic agents that are effective for the treatment of other types of cancers.  This study shows that vesicular stomatisis virus has the potential to be an effective treatment for brain cancer.

Rainbow trout farmed in the United States and Europe are susceptible to infection with the rhabdoviruses viral haemorrhagic septicaemia virus (VHSV) and infectious haemotopoietic necrosis virus (IHNV).  These infections cause significant losses in the fish populations and therefore economic losses for the fish farming industry.  Novel vaccines for both VHSV and IHNV have been developed.  These vaccines consist of DNA encoding for the G protein of the rhabdoviruses.  As the farmed fish are usually exposed to both VHSV and IHNV, a dual vaccine would be ideal.  A previous study tested the ability of a dual vaccine to elicit an immune response in fish.  They were able to show that G protein specific antibodies were produced for each of the rhabdoviruses.  However, the dual vaccine was not tested for efficacy in preventing infection and mortality.  In this study, the ability one injection of the dual vaccine to prevent mortality caused by subsequent infection with both VHSV and IHNV was analyzed.  When unvaccinated fish were infected with both VHSV and IHNV the mortality rate was 88%.  In fish treated with the dual-vaccine prior to infection mortality was decreased to 13%.  This study demonstrates that the dual vaccine effectively reduces mortality due to VHSV and IHNV in fish.  This dual-vaccine could save the rainbow trout farming industry from significant economic losses in the future.

Welcome to WordPress.com. This is your first post. Edit or delete it and start blogging!